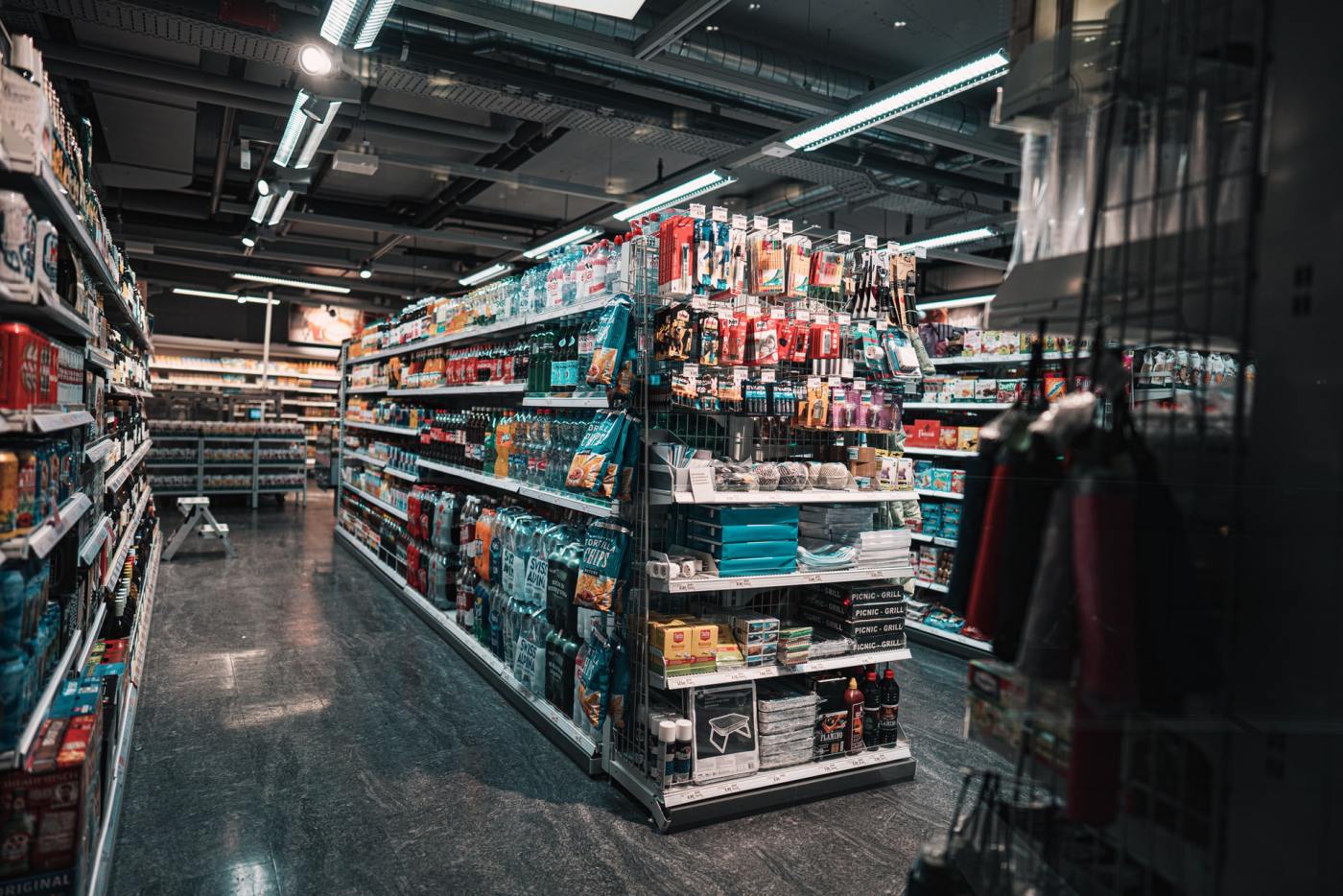 A collection of short stories which explore and celebrate the vampire genre with talented, world-class writers. There’s something here to delight and horrify even the most seasoned vampire fan.

A vampire story by Eric S. Brown – Featured in Fangers Inc. Volume One

John tapped his fingers nervously on the steering wheel. Tonight was the first night of his new job. He stared through the dusty glass of the windshield at the beaming red letters which ran across the top of the new super shopping centre.

He slid on the red vest he’d been given earlier in the day at his orientation and stepped out of his car. Even when he’d came here as a customer, the gigantic parking lot had filled with him awe.

It was 10:45pm, late enough for most of the small town of Sylva to be in bed, preparing for work or school on Monday morning, yet he counted over a hundred cars under the pale glow of the lot’s lights before he gave up his count in frustration.

John despised working and hoped the night shift would require less of him than the rushed hours of the day. The sea of cars around him increased his nervousness about his first night and filled him with a sense of dread. He may have to actually do something after all.

The glass doors slid open as he approached, welcoming him to his new night-time home. The customer greeter nodded as he passed by, most likely laughing inwardly at the new guy. John made his way to the rear of the store and entered the personnel/storage area. Mr. Stephson stood beside the unloading docks as other employees laboured to unload the night’s stock delivery under his supervision. When he noticed John walk in, he turned to extend his hand in greeting.

“John, I’m glad you made it. You’d be surprised how many people sit through orientation just to get paid those few hours and leave never to be seen again,” Stephson laughed.

John took the offered hand and shook it firmly. Stephson’s flesh felt cold and clammy in his grip. “I need the money for more than just a few hours.” John joked.

Stephson led John further into the back of the store. “We have a staff meeting at the beginning and end of every shift. Just to kind of update everyone and keep the whole staff informed of what’s going on, on a day to day basis. You’re excused from tonight’s meeting, this being your first night with us, but I will expect to see you at all the others.” Stephson said firmly. John tried to hide his hatred of staff meetings and merely answered,

“Your office is in here.” Stephson opened a door half concealed by a stack of crates. Inside was a lone chair surrounded by more than fifty monitors showing scenes from across the entire store.

“You’ve worked security before, so I am sure you know the job. I won’t waste time explaining things to you. Get in there and start protecting us from shoplifters,” Stephson laughed, and turned to leave John to his work, but suddenly he stopped in his tracks, looking at John with cold hard eyes, all remnants of his previous kindness gone, and warned,

“Remember your job here is to catch thieves and stop trouble before it starts with the customers, nothing more. Keep everything else to yourself no matter how odd or unusual it may seem. Are we clear?”

Shaken by the cryptic and strange warning, John nodded his agreement quickly, wishing Stephson would just go away.

As Stephson left the room, John shut the door and sat down in the chair. He spun in it a few times and smiled. It was comfortable enough alright. Then he settled in and started watching the screens. His eyes drifting from one to another, until they all seemed to blur into one. An old woman pushed a cart through the produce section. A young man roamed hardware searching for the proper kind of motor oil for his car, after using a computer display to find his type. Long lines of people waited at the front checkout lanes in a hurry to get home. John stretched his hands above his head, yawning.

“Maybe this won’t be such a bad gig after all,” he mumbled to himself.

Time passed slowly in the cramped office however, and soon he began to feel sleepy and totally bored out of his mind. As he struggled to find something to keep him awake, a realization struck him. The breakroom for the employees never appeared on any of the monitors. Most chain stores like this one watched their employees like hawks as they could be an even bigger risk than the customers. He began to experiment with the controls of the monitoring system. On a lark, he decided he would find the breakroom and watch the staff meeting just to have something to laugh at and keep him awake. Surely it would have to be more interesting than the rest of the crap he was watching.

Clicking button after button, he finally found what he was looking for. A man and woman in red Shop-mart vests sat across a table from a young woman in jeans and a T-shirt. The rest of the room was empty, except for vending machines and a tiny coffee maker. He scanned the other screens. No other workers were even on their way to the meeting, yet he was sure Stephson had said there was going to be one. He eyes darted back to breakroom screen, as the young woman slammed her fist into the table and leapt up from her seat. The two in Shop-mart vests moved towards her as if trying to calm her down.

It was only then that John noticed the breakroom’s door was locked and tightly sealed, as the young woman flung herself against it. He watched her lips form a scream and wished the monitors had audio capabilities. She fell to the floor clutching her shoulder where it had struck the door. The man in the Shop-mart vest flung himself at her and lifted her from her feet with a single hand, as if she were as light as a feather. John blinked in surprise. What the Hell was going on? John clicked off the camera, sending it back to its normal random pattern, wondering what he should do. Something was most certainly wrong in there. He tugged the bottom of his own vest, straightening it as he stood.

“What the Hell?” he muttered, “if I check it out at least I’ll get out of this damn room for a while.”

He left the office in a hurried walk for the breakroom. As John rounded the corner into the store’s main rear area, a pimply-faced teenager, whom he knew was in charge of the pet department during third shift, stopped him just outside the breakroom door.

“You’re not supposed to be here. It’s my turn tonight,” he informed John, in an annoyingly high-pitched voice. John flashed his security badge and shoved the kid aside. Muffled screams came from within the breakroom. The kid glared at him and said, “I’m telling Mr. Stephson. You’re going to be in big trouble for cutting in when it’s not your turn.” Then he turned and stormed off in a huff.

‘His turn?’ John wondered. ‘What the fuck?’ Ignoring the pouting kid, John tried the door to the breakroom. It was indeed locked, just like he had seen on the monitors. Fumbling around in his pocket, he fished out the master key he’d been given and slid it into the lock. The screaming had stopped by the time he was able to open the door. He shoved his way inside. Both Shop-mart employees held the woman in an odd embrace, sandwiching her between them, their lips pressed against her flesh. John’s mind screamed ‘group rape’ but that didn’t make any sense. Something like that was more of a myth than reality in a small town like Sylva.

A trickle of red liquid flowed from where their lips met the woman’s skin, as John stared in horror. Mustering his courage, he yelled, “Shop-mart Security! Stop whatever the hell you are doing right now!”

The man and woman dropped the limp corpse, letting it slide onto the tile floor as they stared at John. The man’s eyes burned, casting an eerie yellow glow in the dim lights of the room.

“Who are you?” the man asked in a hollow voice, devoid of emotion. His muscles rippled under his Shop-mart uniform.

John cursed the fact that he hadn’t been issued a gun. The woman stepped towards him, hissing through bared teeth.

“Shit,” John breathed. Backing up slowly, he then fled out of the room. The young woman and his job forgotten. He only cared about getting out of the store alive.

He dashed out into the main part of the store, dodging customers and employees alike. He could see the exit doors up ahead and poured on extra speed, deciding to cut through the freezer section to throw off any pursuit.

Too late, he noticed the orange caution signs on the floor. He flew face first into a freezer of frozen breakfasts. He tried to cry out as the breaking glass slashed his cheeks and throat before his body bounced backwards from the impact. A large shard of broken glass stuck out from underneath his chin, and blood poured down the front of his red vest. He grabbed the shard using the last of his strength to try to tear it free, so he could breathe again, but his hands were too slippery from his own blood. As he blacked out, the last thing he heard was the store’s intercom blaring,

This site uses Akismet to reduce spam. Learn how your comment data is processed.